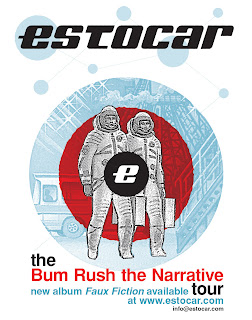 In the past seven years Estocar has played less than a handful of times on KEXP. A DJ even bumped our song Please Advise out of rotation in order to play the Beatles on the day of our CD Release show. We have had a nice run of getting played at KEOL 91.7 Eastern Oregon University each time we played a local show at the now defunct Gadfly in La Grande, Oregon. This June we were able to do an Instudio Performance at WMSE Milwaukee.

With upcoming release of our new album Faux Fiction and the planning of our three week Bum Rush The Narrative Tour, I began to seek out other avenues for getting our album listened to and shows promoted. Why? Well...my personal feelings is that many of the bigger college radio stations are starting to get a little to formulamatic with their airplay and Estocar definitely does not fit their formula at this or really any time. My other thought is that people are still waiting for permission to like Estocar in Seattle.

One of the early adopters of Estocar was a Philadelphia internet radio station called Gashouse Radio. We have had a pretty solid run of being played on that station for about 3 months and were on the stations top ten for about 2 of those months. Unfortunately, we have fallen off their charts and that is fine. There are many new bands touring Philadelphia taking our place on the Gashouse Radio Charts and I think that's a good thing for touring indie bands.

Below is a list of Internet Radio Stations that I will be targeting for spins during our August West Coast Tour. The following stations are 10 minutes or less away from me. Rainy Dog Radio - A University of Washington student run station is out for the summer, but will follow up with them when the University of Washington resumes classes this fall to help promote our Friday September 21st Show at Rat and Raven in the University District. Hollow Earth Radio - I have actually sent this station many emails and cant seem to get them to respond. They are an all volunteer staff so I am sure they are understaffed and busy. I am going to drop off a CD and band one sheet tomorrow afternoon at Hollow Earth Radio. Jet City Stream - They actually invite bands to come down on Friday from 11:00 AM to 2:00 PM to listen to your music. I did this, but found that all radio staff were at the Capitol Hill Block Party.

The remaining stations are in San Francisco and Los Angeles. Soma Fm, Bagel Radio, Moheak, Intraffik, and Indie 1031.
Posted by Estocar at 4:36 PM