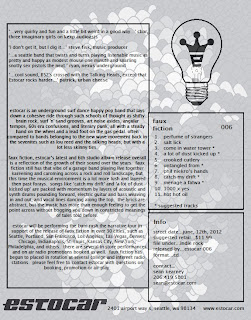 I have allways loved our releases, but this is the first time I honestly believe that we can get some serious college radio play. I reached out to the Tinderbox back in April to learn more about there College Radio promotion service for our upcoming album Faux Fiction. They came back with the following proposal:

300 CDs sent to 300 stations for $2100.00 this would include 8 weeks of CMJ tracking plays at each station, follow up calls to the station regarding the submission, and feedback from music directors for each station. I contacted another college radion submission service and got the following response from Tenni Gharakhanian at The Planetary Group. "Listened to the music and not sure if it's really the best fit for us or something we can excel at for you."

Many of the college radio stations that I would like to target are shut down for the summer and resume broadcasting fall quarter so a big mass mailing would be a waste of time and money at this juncture. That all being said I have wittled down a list of stations in California and Oregon that are open for business during the summer months. We have a two smaller tours in the middle of August and I will be mailing CDs this week to these stations for adding our album to their rotation. Hopefully, some persistent phone calling, emails, and a little good will for a touring band will help get us some airplay in the Portland, San Francisco, Los Angeles, .

What about KEXP? Shouldn't a Seattle/Portland band be targeting the Seattle radio station "where the music matters." Lets save question of whether Estocar music matter to KEXP for another blog post. I will follow up with a future blog posts detailing the results of the trial run.